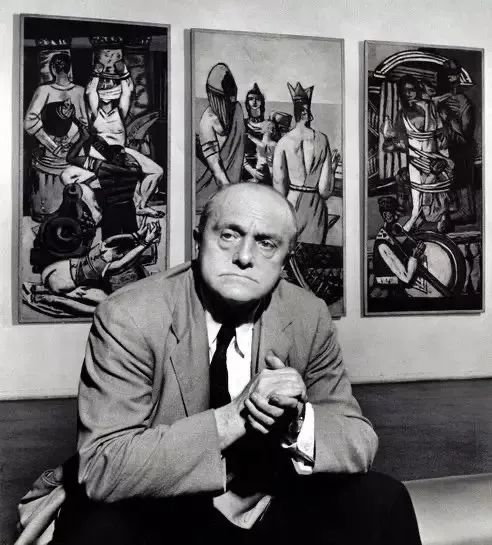 Max Beckmann was born in Leipzig, Germany in 1884 and died in New York in 1950. German expressionist painter, designer, printmaker. Beckmann looked at the German society at that time with hatred, and held a mocking and negative attitude towards deformed and abnormal social phenomena. He combines objective things with subjective imagination, so that his works are symbolic, highly personal, and full of strong realistic and critical expressions. Most of Beckman's characters are deformed and morbid, and the angry, sad and bewildered facial expressions are also the expression of the author's inner feelings. He himself did not agree with the expressions of the early works of Expressionism, opposed those works that were divorced from the status quo and had only narrow spiritual introversion expressions, and established new works with Otto Dix, George Grosz The objective reality school (Neue Sachlichkeit) advocates the use of art to enter criticism and stimulate the public's sensibility to the reality of life. 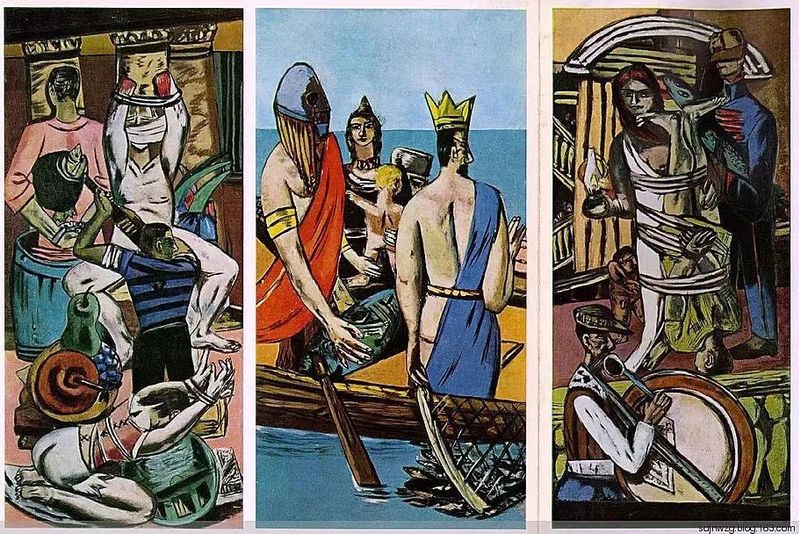 On the panels on both sides of "Departure", Beckmann paints a nightmarish world, much like the gothic absurdity of Bruegel Pieter the Elder. On the left panel, Beckman depicts a torture scene. The victim was tied up, stuffed in his mouth, and dismembered in a horrific way. The right panel focuses on depravity and pain. A woman in a nightgown is escorted by a masked man across a dimly lit stage. Inexplicably, one man was tied head down with the woman, while another man, beating a big drum, marched in front of the foreground stage. Clearly the precise meaning of these characters is intentionally blurred, and Beckman seems to be alluding to the barbarism and depravity that the Nazis imposed on society. The drummers, in particular, are reminiscent of attempts to intimidate opponents. The middle panel depicts a group of heroic figures on a small boat. These small, claustrophobic paintings give people a mood—a vast sea under the blue sky. This work is more like a saviour map, which shows people trying to get rid of the horrors of modern society and pursue a better future. The mythical figures in crowns, Christ-like figures and red cloaks shelter a family of three. The child is coquettish in the arms of its mother, he is a symbol of freedom, and he is about to be taken to a new kingdom. 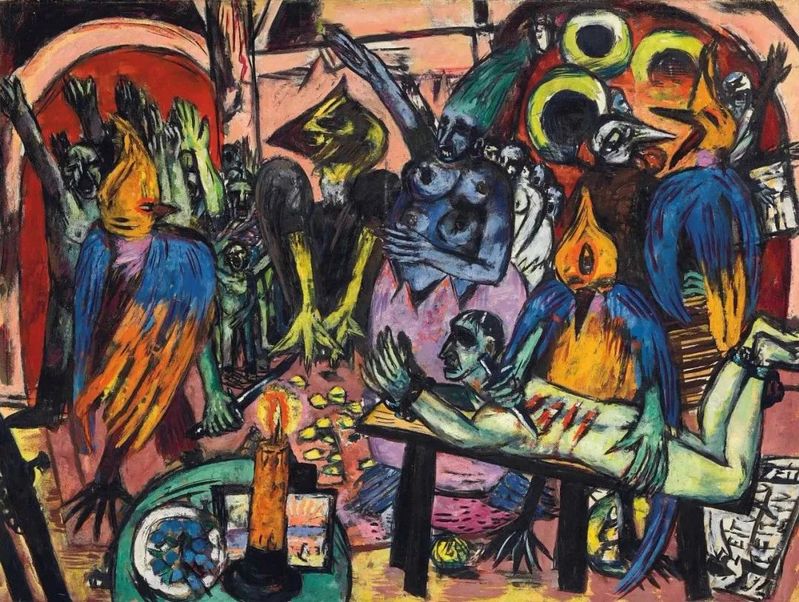 Bird's hell, with its powerful brushwork and vibrant colors, transports the viewer to a spooky underworld where bird-shaped monsters torture humans. In the center of the painting, there is a multi-breasted bird-shaped creature breaking out of a pink bird egg, directing the scene. A black and yellow bird-shaped creature crouches on her right, staring at the scattered gold coins, while behind her there are several The woman flinched. On the left side of the painting, a group of human beings are standing in front of the blood-colored door. They are forced to raise their right hands by a bird-shaped creature with a knife and salute the ferocious-looking female bird-shaped creature, making the picture full of madness and blood. In the front of the screen, another bird-shaped creature locks a man (a symbol of innocence in the Terrorist State) to the table, and cuts bloodstains on his back with a sharp weapon. Perhaps Beckman is the green victim depicted in the painting, tortured physically by demons in hell and forced to cheer, the demon in the center of the picture just born from an evil, fuchsia eggshell, raising his hand to Nazi The symbolism of rituals, candles on the table and books in the painting may be the civilized identity of the victims. This painting, which borrows from Bruegel Pieter in form, is Beckmann's personal allegory of hell, has unique symbolic meaning, and is recognized as an expressionist classic comparable to Guernica. Its complex composition also echoes the style of the 16th-century artist Hieronymus Bosch.

In 1935, Englishman Allen Lane founded Penguin Books with his brothers Richard Lane and John Lane. Penguin Books will continue to provide quality books to the general public for decades to come. 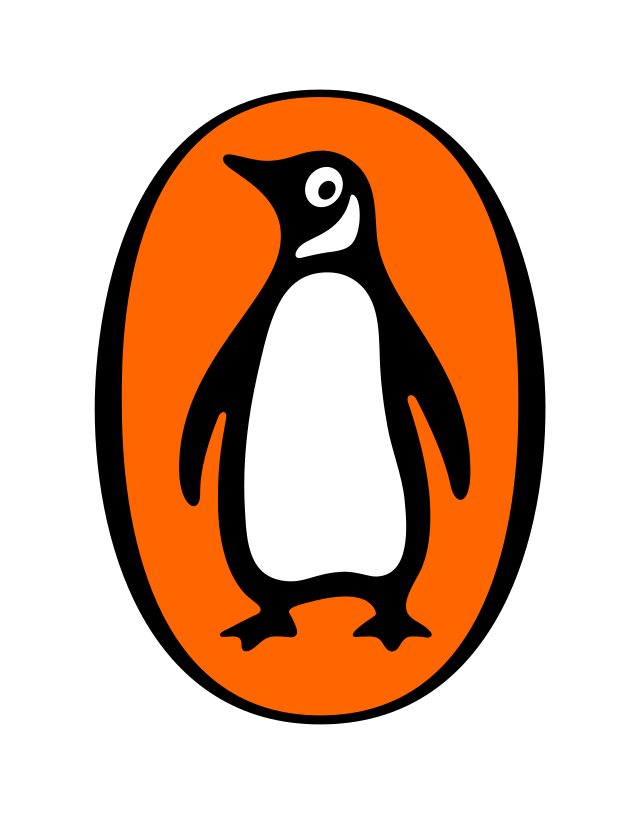 Allen Lane is a persistent person. At the time, major publishers tended to publish higher-margin hardcovers, but Allen Lane and his company stuck with paperbacks. Allen Lane demanded that no book should cost more than a pack of cigarettes. In addition, he strictly limited the size of the book to just fit in the pocket of the clothes. Cheap and portable books quickly gained popularity. 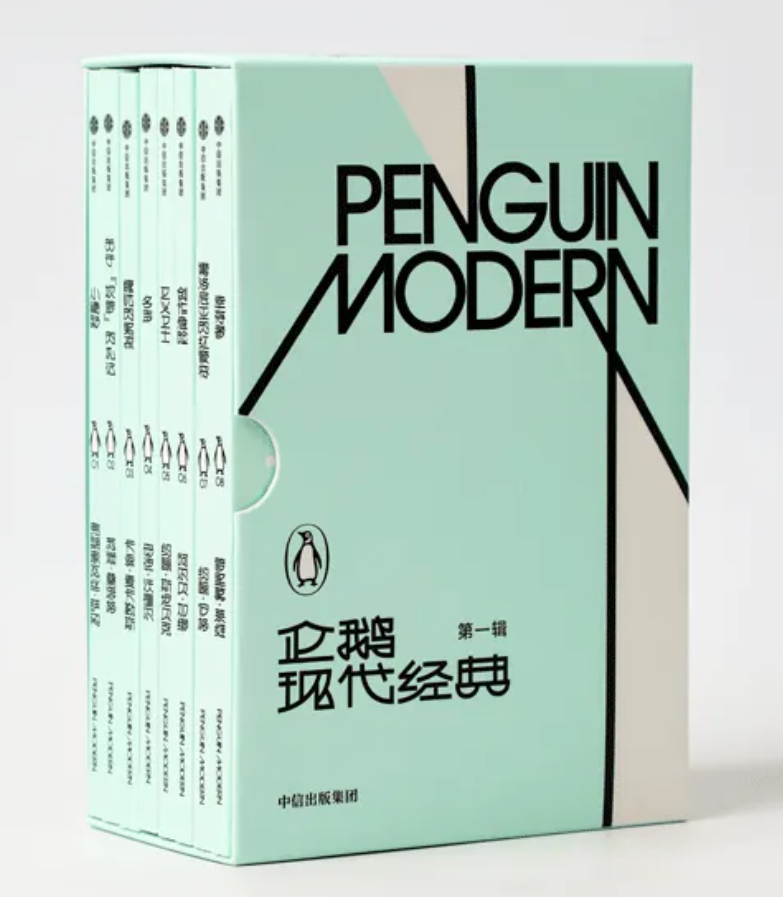 Despite being cheap and affordable, Allen Lane never skimps on book design and layout. "I never understood why a cheap book couldn't have a good design, and a good design couldn't be more expensive than a bad one", he said. He invited Edward Preston Young, a famous British graphic designer at the time, to design the book. 's cover. To this end, Edward also made a special trip to the zoo in London's Regent's Park to capture the penguin's form and draw them on the cover of the book. After World War II, German graphic designer Jan Tschichold redesigned 500 books and created a strict four-page typography standard for Penguin Publishing Group.

Penguins in different shapes on the book cover

Allen Lane and his Penguin Group's insistence on paperback changed the course of world culture. The popularity of these paperback books proves that ordinary people also have the pursuit of knowledge, and their extremely high portability allows people to read books anytime, anywhere, which greatly promotes the mobility of social groups and the improvement of the cultural level of the whole society.